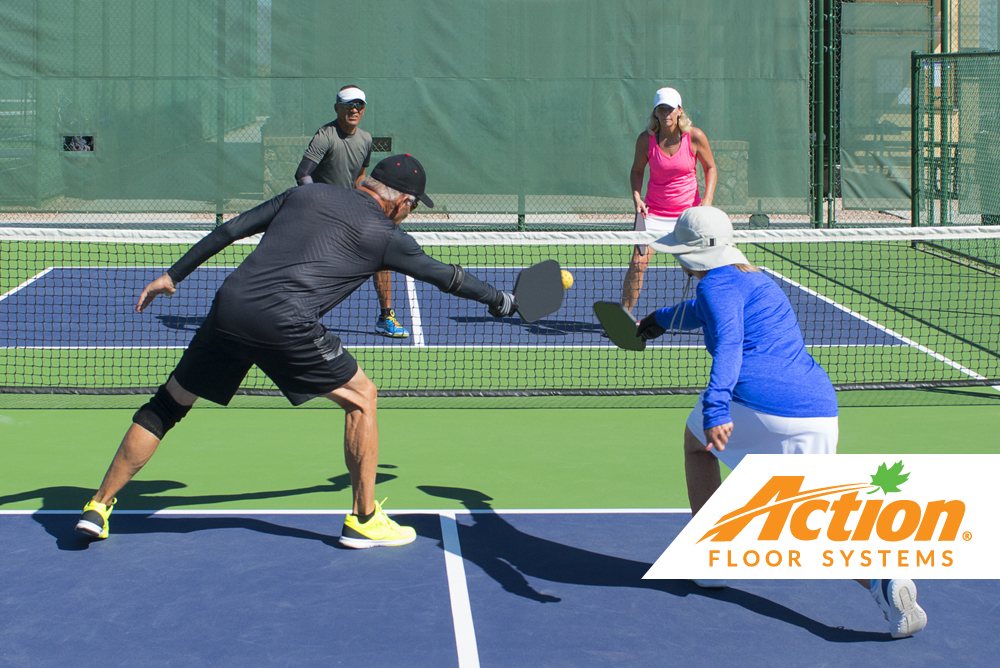 While it has a funny name, no one is laughing at how the fast-growing sport of pickleball is gaining steam. There was plenty of pickleball buzz in the air at the 2018 Athletic Business Show because it represents a variety of opportunities for those providing products and services to athletic and recreational facilities.

If you’re unfamiliar with this racquet sport, imagine a mad scientist combining ping pong, badminton, and tennis into one game. Pickleball has been around for more than half-a-century, but in recent years, its popularity in North America and the world has spiked.

According to the Sports and Fitness Industry Association (SFIA), pickleball grew by more than 11 percent from 2016 to 2017 to a base of more than 2.8 million players, making it one of the fastest growing niche sports. In Europe, there are an estimated 2.5 million players and growing.

While this is good news for makers of pickleball gear and related products, it’s also something architects and designers should keep in mind when planning sports and recreation projects.

What makes a good pickleball court? As with any project, it starts with identifying the end users and understanding what works best for them.

Pickleball is being introduced in high school physical education programs, and it’s even played in prison. But, it is being adopted most frequently by seniors who want to stay active.

Of the 2.8 million pickleball players in the U.S., just under one million are considered “core participants,” meaning they play the sport at least eight times per year. Of those core participants, 75 percent are over the age of 55.

Pickleball is a fun game for couples to play together and, while it’s relatively fast-paced, it’s not as physically demanding as racquetball or tennis. As baby boomers enter retirement and look for ways to socialize and stay physically fit, expect pickleball’s growth to continue.

More on Pickleball’s Benefits for Seniors

Two of the most important considerations when choosing a sports surface for pickleball are comfort and safety. The effects of aging mean many seniors are at a greater risk for injury, and any design that minimizes those risks is a definite benefit to your clients and the end users.

A typical tennis court is nothing more than asphalt or concrete with a layer of acrylic surface paint that may include sand and/or granulized rubber. In short, common tennis courts offer nothing in terms of shock absorption (aka force reduction) to protect athletes’ joints.

There are options, however, to install courts that do provide shock absorption, even allowing you to specify different levels of force reduction based on the thickness of rubber padding that’s part of the system.

Action Herculan PB/TC Series is a unique, polyurethane sports surface designed for either indoor or outdoor use. It includes a rubber mat, which creates a cushioned court to reduce impact and stress on a player’s body. Action Herculan PB delivers as much as 32 percent shock absorption when a 9-mm mat is used.

Beyond having the potential to reduce the risk of injury, the comfort of a quality court means older athletes can play for longer periods of time. Plus, after playing on a premium pickleball court like Action Herculan PB, athletes of all ages report feeling less sore the day after a match. It’s all thanks to the shock absorption, which provides a point elastic sports surface that’s more forgiving on joints and muscles.

According to the National Council on Aging (NCOA), slips and falls are the leading cause of injury among older Americans. That’s why slip resistance should be another key attribute of a good pickleball court, especially for outdoor courts where rainy weather might limit playability.

While acrylic paint can be quite slick, the polyurethane topcoat of Action Herculan PB is better at retaining its slip resistance. Users also find it dries in less time and moisture can be easily removed. Lance Lutke of Floor Care Concepts in Michigan oversaw the installation of outdoor courts at a large facility dedicated to pickleball, and he noticed a difference.

“A typical pickleball or tennis court surface gets extremely slippery,” Lutke says. “After heavy rain, you need to squeegee off the puddles, then you still have to wait for it to completely dry. We noticed with the Action Herculan PB that they could start playing immediately after clearing puddles off the court. It dries very quickly.”

Pickleball vs Tennis: The Case for Dedicated Courts

Even though pickleball is still on the verge of entering the mainstream, a growing number of facilities, such as the Picklebowl in Lake Odessa, Michigan, are reserved for the game alone. During the first tournament at the facility, which drew hundreds of people from 13 states and Canada, players noticed the quality of the Action Herculan PB courts.

“A lot of those people have come back to play on it again because they liked it so much,” says event organizer, Brad Haskins.

In many parks, however, you’ll find pickleball game lines painted over the top of tennis courts. Temporary, portable nets are brought in when a game of pickleball is played. While this was an acceptable solution when pickleball was on the fringe, it’s becoming clear that there needs to be some separation.

In fact, there is a bit of rift between tennis and pickleball players in many communities.

Tennis players feel pickleballers are infringing on their turf, while pickleball players feel they aren’t being treated fairly. For just a few examples, read about the strong opinions over accommodations in Green Valley, Arizona, the city council controversy in Courtenay, British Columbia, or the dispute between tennis and pickleball clubs in Wilton, Connecticut.

The sentiments of both sides are expressed quite clearly in a story from the Richmond Times-Dispatch, covering a community park conflict in Chesterfield, Virginia. The city assumed the two groups could share space and everyone would be happy.

“No, we’re not happy at all. We have a lot of players and we need places to play,” pickleball player Linda Scott told the Times-Dispatch.

“You can’t concentrate with those people next to you. Have you heard the sound?” complained tennis player Cleveland Lamison of pickleball’s telltale noises.

These kinds of conflicts can be avoided with plans to include separate, dedicated courts for pickleball and tennis enthusiasts. Protecting your project from the fiery emotions of opinionated athletes may be just as crucial as protecting their joints with shock absorption.

If you have questions about Action Herculan PB or any of our other polyurethane sports flooring, don’t hesitate to contact Action Floors for more information. Architects and facility owners will also find valuable information in our exclusive ebook on selecting synthetic sports flooring.

These athletic surfaces are certified by the International Tennis Federation (ITF) and meet requirements detailed under, internationally recognized athletic surface standards for force reduction (EN-14808 or DIN 18032-2) and vertical deflection (EN-14809 and DIN 18032-2). Plus, they are ideal for resurfacing existing courts and provide an eco-friendly solution, which is something everyone will appreciate.