Australia’s Victorian Gold Rush took place in the 1850s, around the same time as the California Gold Rush in the United States. It had a huge impact on the economy Down Under.

A decade after the rush began, Australia’s population more than doubled, and nearly half of the country’s residents were living in the state of Victoria. One of the communities that experienced the most growth and the most discoveries of gold was Ballarat, a city along a river in Victoria’s Central Highlands.

Tent cities popped up as hordes of people seeking their fortunes arrived and made Ballarat home. The Victorian Gold Rush produced many of the largest nuggets ever discovered, including the second largest in Ballarat – a 152-pound monster known as the “Welcome Nugget.” While gold mining and prospecting brought wealth to the region, it didn’t last. Around the turn of the century, gold extraction began to slow down. Mining operations became more difficult and expensive. There was a prohibition on the export of Australian gold in 1915, and the nation eventually abandoned the gold standard.

Populations began to dwindle as people exited. Some Australian gold towns completely disappeared and became ghost towns. Yet, even though its population growth came to a halt and the city went into decline at the start of the 20th century, Ballarat remained. Throughout the years, the city clung to and celebrated its heritage, opening museums dedicated to the gold rush era, and even naming it’s men’s and women’s basketball teams the Miners and the Rush, respectively.

A century later, the situation is reversing. In the early 2000s, mining operations began again in Ballarat and surrounding areas as the rising cost of gold prompted a resurgence in demand.

Now, people are flocking to Ballarat from smaller towns as well as from nearby Melbourne, prompting concerns that the city may be growing too quickly. One report estimates Ballarat’s population could double by 2050. Pat McNamara, one of the report’s coauthors, told the Herald Sun that this could cause problems:

One thing every vibrant community needs is a place for sports and recreation, and the Ballarat community was outgrowing its existing indoor facilities. Plus, in addition to the population surge, there was also a surge in popularity for the game of basketball.

As for Basketball Ballarat, the association announced it would have 500 teams competing in the 2019 season, including more than 340 youth teams, which the Ballarat Courier says is an all-time high. The increased participation sparked demand for court space. Action Floor Systems’ Australian representative, Norm Goedheer, says the association resorted to scheduling many games at local school gymnasiums.

What the city needed was an updated indoor sports facility that could ease demand and host crowds for big games. Leading the charge to earn government funding and turn the project into reality was Basketball Ballarat CEO Peter Eddy, someone Goedheer describes as “a switched-on guy.”

Eddy spent years petitioning all levels of government to provide funding for the $24-million Ballarat Sports Centre extension, which opened in August of 2019. During that time, plans for the project grew along with anticipation. What was originally going to be a three-court sports stadium doubled in size to six full-sized basketball courts, with seating for 3,000 spectators around a showcourt, which will be used for high-profile events.

Eddy was closely involved with many aspects of the project, including selecting the sports floor system upon which athletes from the community and visiting teams would compete. Basketball Ballarat found the perfect partners in Action Floors and the experienced sports flooring experts from Ace Floors and Coatings.

The team from Action Floors worked side-by-side with Eddy and Basketball Ballarat from early in the process. Action Floors Vice President of International Sales Mike Mann made trips to Australia to help answer questions from government officials as Eddy championed the project, trying to win support and approval for what he believed to be much-needed facilities.

The sports centre extension needed a floor with performance attributes that live up to the expectations of professional-level teams. More specifically, the project required a FIBA Level 1-certified sports floor system that would allow the facility to be used for national and international competition–but still wouldn’t break the budget. 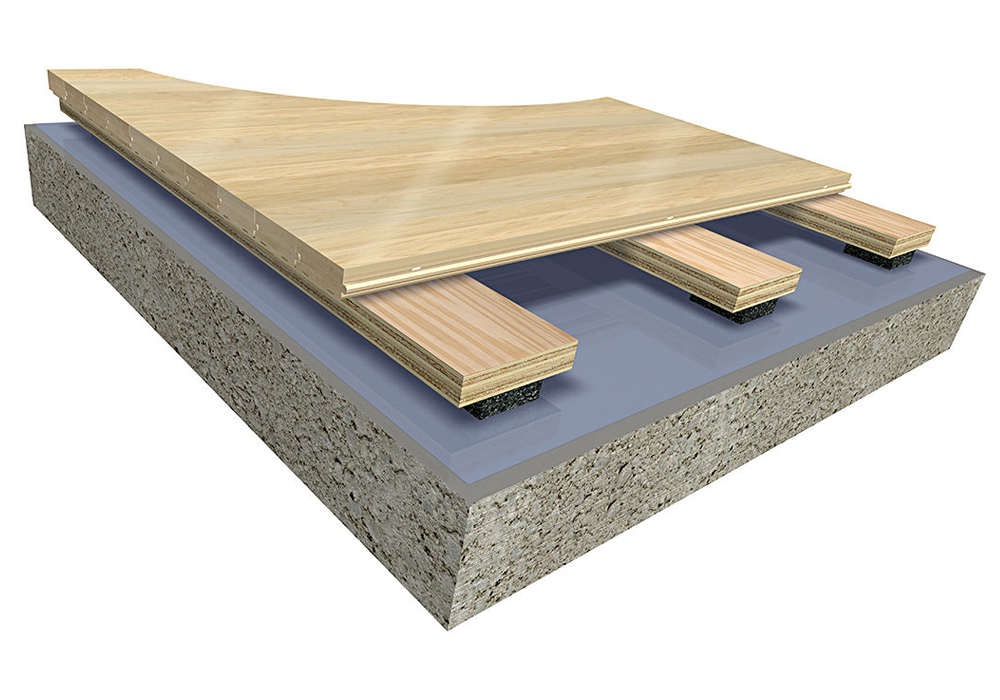 “The benefit of wide body sleepers is that their width means they are closer together,” Goedheer explains. “That narrows the gaps between sleepers and helps provide uniform performance and better ball return.”

It’s quite apparent that picking the best sports floor possible was a key decision for the project. Goedheer says Eddy recently told him that, after five years, he still has the original Action ProAir WBS sample sitting on his desk.

When it came time to identify the right sports flooring dealer, the choice was easy. Dale Joseph, Jason Tully, and the team from Ace Floors and Coating had developed a reputation for delivering quality and reliability on major projects exactly like this.

Ace Flooring took on the high profile installation at the Australian Institute of Sport (AIS) in 2016. And more recently, they’d completed a similar six-court installation for Basketball Geelong. Both these projects involved FIBA-certified floor systems that enabled the facilities to host international competitions. The AIS facility is even be used as a training ground for future NBA stars.

“They’ve done multiple facilities of this size,” says Goedheer of the sports floor dealer. “But the biggest thing they bring to their work is a real care factor. Even though they work for builders, they migrate toward the needs of the end user.”

Another thing that made Ace Flooring a uniquely suited partner for the Ballarat Sports Centre was it could also provide retractable seating for the showcourt through its sister company, Ace Seating Systems. Because of this knowledge, Jason Tully says the Ace Flooring team made specific modifications to the floor system, adding extra floor supports to distribute the load of two units with 1350 seats each and weighing in at around 60 metric tons apiece. 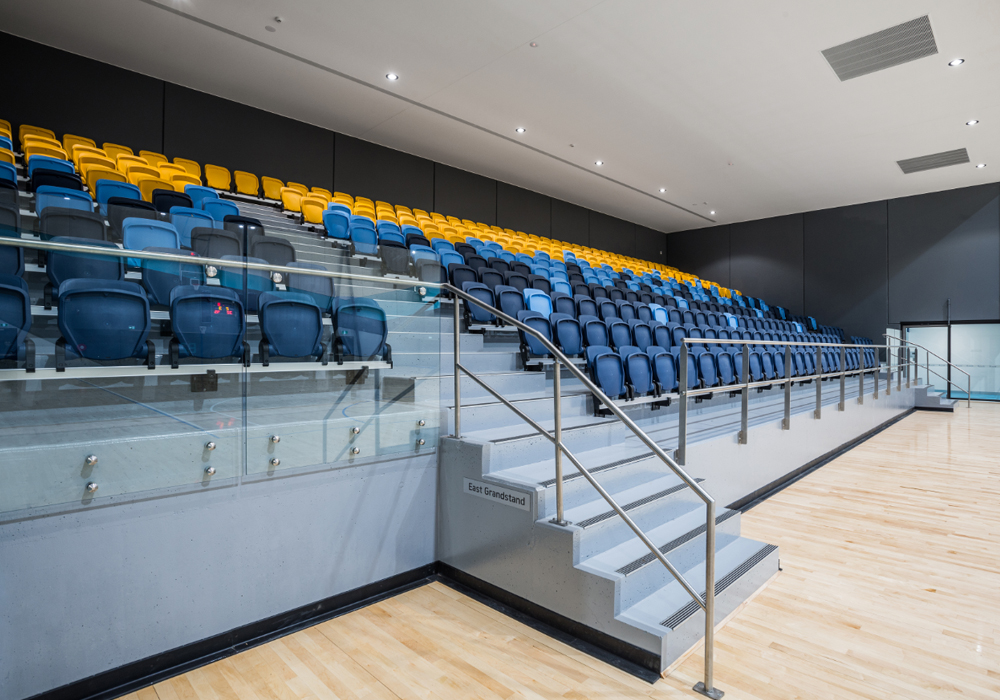 A seating unit from Ace Seating Systems in the Ballarat facility

That wasn’t the only consideration Tully and Joseph had in mind during the project. Winter rains in Victoria caused leaking that threatened to derail the flooring installation. But the Ace Flooring team was able to rescue the floor and complete the job on schedule. Tully says withstanding weather conditions was always on their minds.

“Ballarat is a very cold place in the winter with an average of five degrees colder than Melbourne,” he says. “We allowed for greater expansion/control joints due to this factor.”

A Future that Looks Bright as Gold

The Ballarat Sports Centre officially opened on August 4, 2019. Tully and his team as well as Eddy and everyone at Basketball Ballarat are celebrating mission accomplished.

“It’s great to have completed [the project] as it will be a massive asset to the community for decades,” Tully says

“Everyone involved has been a little overwhelmed by the quality of the design and construction of the new facility,” Eddy says. “It has exceeded all expectations and the flooring and retractable seating systems provide the flexibility and quality finish we needed to meet everyday use and to attract major national level events.”

Dignitaries who attended the grand opening ceremony agree. The extension will allow more people to play basketball, netball, and volleyball in a state-of-the-art facility that is expected to boost the local economy.

The Melbourne United will take on Illawarra Hawks in mid-September on the main court, and a rising basketball star is expected to participate. 17-year-old LaMello Ball joined the Hawks as he waits for NBA eligibility. So, the basketball world will be watching.

Australian Leisure Management magazine reports that several state-level championship basketball events will take place in the facility over the next few years. Peter Eddy says the Ballarat Miners and Rush will begin using the new courts in 2020. Speaking of Eddy, he was inducted into the Ballarat Sports Hall of Fame before the extension opened. During the ceremony, he mentioned that 2020 may signal a good time for him to step down as CEO of Basketball Ballarat. He cites the Ballarat Sports Centre as an experience that produced special memories.

It will also be part of his lasting legacy. Because, while Ballarat may face more growing pains as the population continues to expand, one thing is certain … people will have a place to play and watch basketball.

Action Floors takes pride in every project involving our hardwood maple sports floors and synthetic sports floor systems. We’re always willing to work side-by-side with facility, owners, architects, and others to find the right system for the project and the right local dealer to install it. Contact us today to find out more about how we can partner with you.