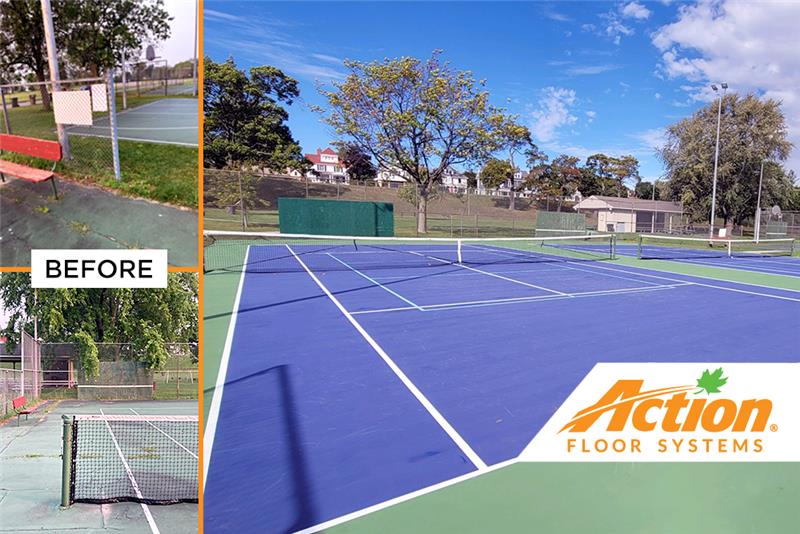 Kim Peterson, recreation director for the city of Escanaba, Michigan, had a problem: The surface of Ludington Park’s four tennis courts had reached the end of its usable lifespan. The courts had been unused for the last two years and became an eyesore instead of a valued feature of the park. To make matters worse, the organizers of the annual Michigan-Wisconsin High School Tennis Open tournament discontinued using the courts due to player safety concerns. 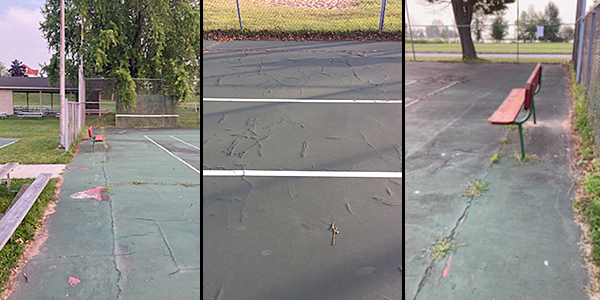 With these factors in mind, the decision was made to resurface the courts. The initial revitalization plan involved utilizing the same method that was used repeatedly over the past 70+ years: stripping off the asphalt’s existing acrylic paint, repairing and leveling the surface, and then recoating it with a new acrylic topcoat. Although this technique had the lowest initial cost, the durability, performance, and longevity of the surface was far from ideal. Peterson knew from experience that acrylic paint provided no additional cushion to reduce injuries and improve ball performance.

She was also aware that the initial beauty of the acrylic would quickly fade, and the surface would begin to crack about two years after application. This was a costly cycle she had repeated multiple times before. If the entire asphalt slab was replaced prior to adding fresh paint, the durability would be improved initially. However, the cost would be significantly higher, and the courts would still need to be recoated in three to five years.

While exploring better options for the resurfacing project, Peterson recalled the high-quality courts in the nearby city of Iron Mountain, Michigan. She learned from the city’s parks manager that the urethane surface of the courts had been installed over eight years ago and had not yet required any resurfacing. More importantly, they still looked great, and players loved the feel and performance of the cushioned surface.

Based on that information, Peterson contacted Gary Zander, Action Floors’ regional sales representative, to learn more about the products and methods that were used on the Ironwood tennis courts. According to Zander, they had installed the Action Herculan Tennis/Pickleball (TC/PB) Court Pro System, which consisted of a seven-millimeter rubber mat covered by a two-millimeter coating of Herculan urethane. The system offered a variety of benefits, including a safer cushioned surface, better ball performance, drastically improved surface durability, and a seamless coating that would prevent water from reaching the asphalt and causing cracks due to the freeze/thaw cycle brought on by Michigan’s harsh winter weather. Zander traveled to Escanaba a short time later to meet with Peterson, evaluate the current condition of the four tennis courts, and determine the best approach to the project. Upon inspection, it became obvious that the courts were in poor condition and would need extensive remedial work before the Herculan-based system could be installed.

With a recommendation in hand, Peterson began the lengthy process of securing approval from community leaders and local citizens. Decision makers initially raised concerns over the higher-than-normal initial investment required for the Action TC Pro upgrade, but soon realized that the system not only offered additional benefits over the acrylic surface, but it also provided substantial cost savings in the long run due to the decreased need for frequent resurfacing.

Another benefit of the Herculan system also became apparent: The surface was ideal for pickleball—a paddleball sport played on a tennis court that combines elements of badminton, table tennis, and tennis—which has recently gained popularity with the over-fifty crowd. The seven-millimeter sheet of rubber adds an injury-reducing cushion that’s not possible with an asphalt and acrylic surface. That’s important for aging pickleball enthusiasts who may be more susceptible to injury.

Adding pickleball markings to the courts’ planned tennis markings would be a substantial enhancement that would greatly increase utilization while adding relatively little cost to the overall project. With the addition of inexpensive net convertors, the courts could be quickly and easily converted from a tennis court to a pickleball court and back again. The community soon realized that they would not only have the pleasure of playing on four greatly improved tennis courts but would also have access to Escanaba’s first legitimate pickleball courts. This provided the final nudge the proposal needed to be given the green light.

With the upgraded project proposal approved, the Action Floors installation team went to work. With the help of Rick Larson, Escanaba’s recreation foreman, the team performed the substantial remedial work necessary to move the job forward. The old acrylic surface was removed, and the degraded asphalt surface was patched and leveled. A seven-millimeter rubber mat was then laid down over the entire court and covered with two-millimeters of urethane. During the Herculan installation process, the combination of markings for both tennis and pickleball were added.

Reaping the Benefits of Combined Tennis and Pickleball Courts

When completed, the newly renovated courts received great reviews from both tennis and pickleball players alike. Comments from both groups were overwhelmingly positive, especially regarding the general “feel” and performance of the courts and the additional safety factor provided by the cushioned surface. Players were also pleased to be outdoors and by how quickly the nets could be changed over to accommodate whichever game was being played. As for the overall appeal, Peterson says, “The courts look awesome—they really stand out and make a huge difference in the appearance of the park. Plus, it’s nice to see them being used again instead of being just an underutilized, vacant space.”

Looking back on the project, Peterson and Zander agree that converting the courts to multi-use was a smart move. In addition to increased utilization, the buzz within the close-knit pickleball community brought a lot of attention to Ludington Park. Soon the nearby cities of Kingston and Kingsford were asking how they could get similar courts themselves.

When asked what he would do different, Zander replied, “I’d install park benches nearby to accommodate the large number of daily spectators we had during renovation. We felt bad that they had to bring their own lawn chairs.”

Looking for innovative alternatives for your next flooring or sports surface project? Speak with an expert at Action Floor Systems to learn more about creative solutions that will help make your plans a reality. Contact us today to get started.